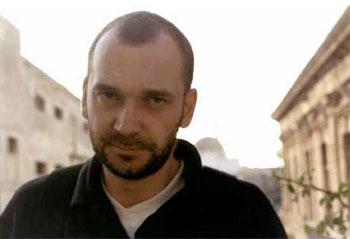 Born in Warsaw 1966. Lives and works in Warsaw and Berlin.

Artur Zmijewski is considered to be one of the most prominent radical figures on the Polish art scene, and his oeuvre reflects his concern with wide-ranging social problems. He frequently examines mechanisms of power and oppression within the existing social order – as well as social conflicts bordering on violence – while exposing the instinctive human inclination towards evil. Moreover, his works examine the relationship between extreme emotions and their physical expressions. They are concerned with the disruption of the human body and of cognitive functioning in extreme cases such as illness or disability, while also examining mechanisms of memory and collective trauma. These works are usually constructed as interviews or documentary films, which are at times provocative and often direct to the point of cruelty. The body is the basic medium through which Zmijewski communicates his philosophy concerning power and resistance: the naked soldiers in the drill yard, the actors in the gas chambers and the various handicapped people are all exposed to one form or another of social experimentation. In his work Repetition, for instance, which was exhibited at the Polish Pavilion at the 2005 Venice Biennale, Zmijewski reconstructed the well-known prisoner experiment performed by the psychologist Philip Zimbardo at Stanford University in 1971. This experiment, which is considered to be a milestone in social psychology, examined behavior in prison cells and proved that the legitimization of inhuman behavior led to blind obedience and a total abandonment of preexisting values. His sweeping conclusion was that authority is corruptive and produces evil.

In the video work Them (2007), which was exhibited at Documenta 12, Zmijewski brought together in a single space representatives of four extreme ideological groups: a group of conservative Catholic women, a fundamentalist Jewish youth group, a group of left-wing civil rights activists and representatives of the nationalist organization “All Poland Youth”. In the course of this encounter, which was documented on video, Zmijewski orchestrated what could be defined either as a game or as a social experiment. According to the rules, which were set forth by the artist, participants were asked to give expressions to their ideological tenets through the use of images and other graphic symbols, and to use these graphic signs in order to entertain a dialogue. The workshop was composed of four meetings involving numerous arguments and attempts at conviction; the level of visual and verbal violence grew increasingly intense with every meeting – culminating with the opposing groups setting fire to each other’s symbols. In this work, Zmijewski exposes the mechanism underlying conflicts that are based on fanatic beliefs. He produces an allegory for processes of symbolization and for their patterns of action and influence on human consciousness. The model for this experiment was based on a game he himself participated in as a student – which was designed to expose pathological tendencies stemming from hatred through the use of visual tools.