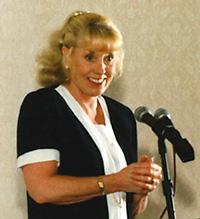 In 1976, three innocent children were killed in a shooting incident in Belfast. The housewife and secretary Betty Williams witnessed the tragedy. She decided to launch an appeal against the meaningless use of violence in the conflict between Protestants and Catholics in Northern Ireland. Betty was joined by the dead children’s aunt, Mairead Corrigan, and together they founded the peace organization the Community of Peace People.

Betty Williams had a Protestant father and Catholic mother, a family background from which she derived religious tolerance and a breadth of vision that motivated her to work for peace. Early in the 1970s she joined an anti-violence campaign headed by a Protestant priest, before she threw herself with full force into grass-root activities for the Peace People. By setting up local peace groups comprising former opponents who undertook confidence-building measures, they hoped to set a peace process in motion from below.

The Northern Irish peace movement disintegrated in the course of 1978. This was due both to internal disagreements and to the spreading of malicious rumors by Catholic and Protestant extremists.