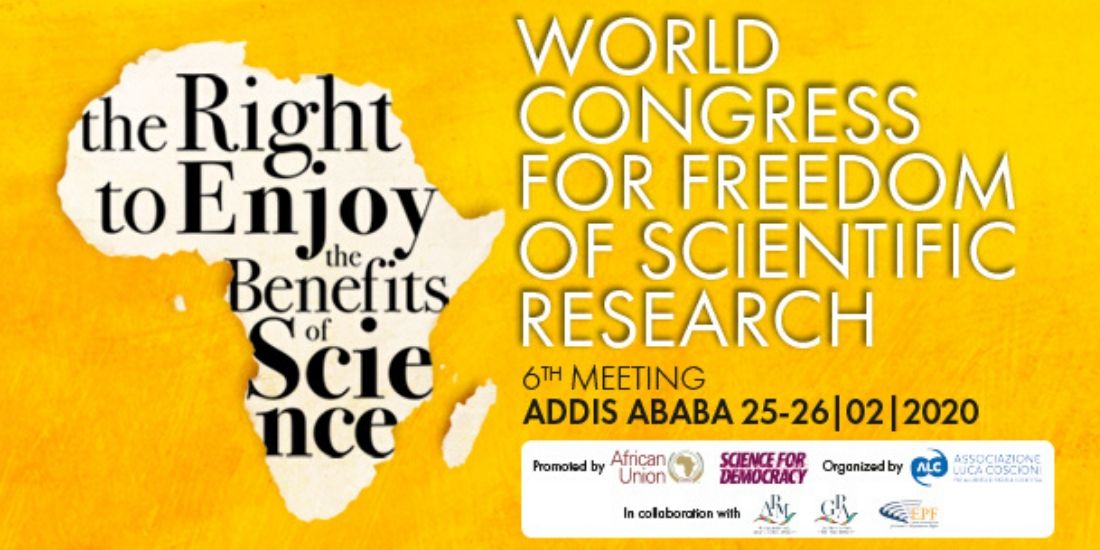 The right to enjoy the benefits of Science

The Associazione Luca Coscioni and Science for Democracy are organizing the 6th meeting of the World Congress for Freedom of Scientific Research in Addis Ababa, Ethiopia from 25 to 26 February 2020. The event is facilitated and hosted by the Commission of the African Union in the person of Sarah Mbi Enow Anyang Agbor, Commissioner for Science and Technology.

Go to: The Program and the Speakers

Go to: Registration and logistics

Go to: The Organisers

Go to: Something to read ahead the Congress

Go to: Support Science for Democracy

Angela Melo, Director, Policies and Programmes, UNESCO (by Video-message, introduced by  Lydia Gachungi Science Programme Consultant at the UNESCO Liaison Office to the African Union and the United Nations Economic Commission for Africa)

➡ How we can use stem cells to repair the brain — Malin Parmar, Professor at Developmental and Regenerative Neurobiology, Lund University, Sweden

➡ 15:45 Second Session: The Benefits of Evidence-based Policies to Advance Sexual and Reproductive Rights

➡ 18.30 Dinner at the African Union, Multipurpose room at New Building

➡ 09.00 Third Session: The Benefits of Scientific Innovations in the Farming and Consumer Goods Sectors

➡ Communicating the Science of Gene Modification: Past, Present and the Future — Margaret Karembu, director of ISAAA AfriCenter, chair of the Open Forum on Agricultural Biotechnology (OFAB) Kenya Chapter Programming Committee.

➡ Fares Mili, Chairman of the Tunisian Society of Tobaccology and Addictive Behaviors

➡ Norman Mushabe, Science Programme Consultant at the UNESCO Liaison Office to the African Union and the United Nations Economic Commission for Africa

➡ 16.15 Presentation and adoption of the outcome document

Science for Democracy is a platform launched in October 2018, by some members of Associazione Luca Coscioni to promote the affirmation of the “right to science” through a dialog between the scientific community and decision-makers all over the world at different levels.

In this context, since its inception Science for Democracy has followed the drafting process of a “General Comment on Science” by the UN Committee on Economic, Social and Cultural Rights, which is further clarifying the numerous implications deriving from the implementation of Article 15 of the ICESCR.

Science for Democracy has organized ad hoc panel discussions and side-events at the UN in Geneva and Vienna to raise some of the issues that could have benefited from specific mentions in the General Comment, such as human and vegetal biotechnologies, reproductive health, controlled narcotics for therapeutic purposes, gender equality in science, as well as open access to scientific literature.

To complement more in-depth discussions, Science for Democracy has also organized public demonstrations to raise awareness for the general public. The “Give crispr a chance” snack organized in front of the European Parliament in March 2019, and repeated at the Polytechnic in Bari, Italy are two such examples. In front of a large crowd, mostly made up of students, speeches were delivered explaining what crispr is and the repercussions of the 25 July 2018 ruling of the European Court of Justice. A crispr-produced rice meal was consumed by scientists to demonstrate the safety of the technique.

The themes covered by Science for Democracy are wide-ranging, and in general every scientific issue is relevant. In order to engage decision-makers, a document presenting 11 points was submitted to candidates in the European Parliament elections in spring 2019. The text includes issues ranging from sexual and reproductive health rights, disability, end of life decisions, human and vegetal genome editing, to embryo research, controlled narcotics and policy evaluation processes and impact evaluation.

Associazione Luca Coscioni is dedicated to the promotion of scientific research and the ascertainment of civil liberties in accordance with regional and international instruments of human rights.

The Association carries out its activities through raising public awareness, promoting advocacy campaigns, providing legal assistance to people whose rights are violated, launching action alerts for decision-makers, and generating attention to specific themes, also through civil disobedience and court cases.

The fields of action of the Associazione Luca Coscioni are wide-ranging, from the freedom of scientific research and disability rights to reproductive rights (assisted reproduction and contraception), end of life decisions and drug policy. Other campaigns include appeals for more funding for research and the debureaucratization of health systems.

The African Union is a continental union of 55 member states for a total of over 1 billion people. Its aims include the promotion of further continental unity, socio-economic integration, the coordination of positions at the international level, and an improvement of living standards.

Some of the goals of the African Union correspond to the themes of the World Congress for Freedom of Scientific Research, namely the promotion of scientific research, the participation of women in society and decision-making and an improvement of public health.

The Assembly of the African Union is a gathering of the heads of state and o government, who meet twice a year and take the main decisions. The secretariat of the African Union, the Commission, carries out its daily operations and is based in Addis Ababa.

Something to read ahead the Congress

The 6th Meeting of the World Congress for Freedom of Scientific Research is at the core of Science for Democracy activities. Learn more about how you can contribute to our initiatives and the realisation of this unique appointment.

The right to enjoy the benefits of science: the World Congress for Freedom of Scientific Research in Addis Ababa

The themes at the center of the debate will contribute to the global debate on the “Right to Science”, which constitutes the object of the latest “General Comment” of the UN Committee on Economic, Social and Cultural Rights. The Congress will therefore include speakers and round tables on the promotion of scientific culture, open access to science, vegetal biotechnologies, rare, infectious and non-transmissible diseases as well as aerospace.

Finally, particular attention will be given to the contribution that women can bring to scientific progress in general. All over the world women account for less than a third of those employed in scientific research and development. The situation presents some encouraging aspects in developing countries that need to be supported as women are less likely than men to enter a STEM (science, technology, engineering and mathematics) field but more likely to leave. Furthermore, female underrepresentation in clinical trials reduces women’s opportunities to access effective treatments posing problems in terms of discrimination and full enjoyment of the right to health. Ultimately, women and girls are unable to enjoy the same opportunities than men when it comes to STEM fields.

Target participants in the World Congress will include Commissioners of the African Union concerned with Human Resources, Science and Technology, Social Affairs, Rural Economy and Agriculture; members of national executive and legislative bodies, relevant regional organizations and UN Agencies and Offices, academics and research institutes, media, civil society and non-governmental organizations with a particular focus on those that work on patients rights.

The 2020 Congress is convened a few weeks after the publication of a draft of the above-mentioned General Comment on Article 15 of the International Covenant on Economic Social and Cultural Rights (ICESCR), which addresses what, for some time, has been called the “right of” and the “right to” science.

1. The States Parties to the present Covenant recognize the right of everyone:

a) To take part in cultural life;

b) To enjoy the benefits of scientific progress and its applications;

c) To benefit from the protection of the moral and material interests resulting from any scientific, literary or artistic production of which he is the author.

2. The steps to be taken by the States Parties to the present Covenant to achieve the full realization of this right shall include those necessary for the conservation, the development and the diffusion of science and culture.

3. The States Parties to the present Covenant undertake to respect the freedom indispensable for scientific research and creative activity.

4. The States Parties to the present Covenant recognize the benefits to be derived from the encouragement and development of international contacts and co-operation in the scientific and cultural fields.

The interaction between science, the scientific method, evidence-based debates and the decision-making process in full respect of the international Rule of Law has always been at the center of the five meetings of the World Congress organized since 2004 at the Italian and European Parliament by the Associazione Luca Coscioni.

The Addis Congress will explain the ramifications the “right of” and the “right to” science on a variety of topics that are becoming crucial for African countries to achieve the Sustainable Development Goals (SDGs) by 2030, arguing that international legality will need to take into structural consideration all issues related to scientific evidence when policy decisions are taken, stressing the need to educate the general public on the ways in which science works through the verification, duplication, and falsification of research. All SDGs would greatly benefit from investments in research and technology to strengthen science and innovation in the developing world.

The decision to organize the 6th session of the World Congress in Africa was taken at the European Parliament in Brussels in April 2018 at the end of the 5th meeting, when it was decided that the next “[…] World Congress meeting […] should take place in a developing country that is struggling to establish or reinforce its democratic institutions, the Rule of Law and that is promoting and protecting scientific progress”.

In several recent AU-sponsored meetings science has been hailed as one of the resources that should be made increasingly available to the African continent both in terms of investments and policies that can allow its use in line with the Agenda 2063 launched to mark the 50th anniversary of the establishment of the African Union.

The declaration outlining the agenda marked the re-dedication of Africa towards the attainment of the African vision of “An integrated, prosperous and peaceful Africa, driven by its own citizens and representing a dynamic force in the international arena” to be achieved as a continental endeavor by 2063.

The agenda of the Addis Congress is in discussion with the African Union. It will include a general presentation on “science as a human right” that will be elaborated in various fields from increasing quality education, including open access to scientific literature, to new breeding techniques, from palliative care to family planning to aerospace projects. Other issues addressed will be global warming, information technology, Artificial Intelligence, as well as the role of women both concerning their reproductive rights and their underrepresentation in STEM fields.