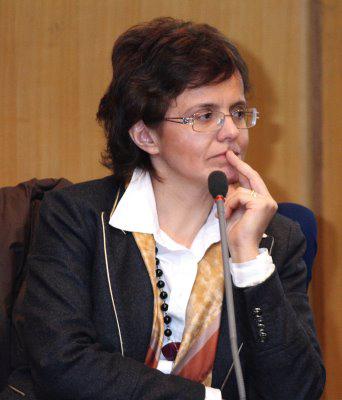 Elena Cattaneo was born in Milan in 1962. Married with two children. In 1986 she graduated cum laude in Pharmacy at the University of Milan, and later obtained a PhD in Biotechnologies Applied to Pharmacology. Since December 2003, she has been Full Professor at the University of Milan, where she teaches biotechnological applications in pharmacology and stem cells in biology and regenerative medicine at the Faculty of Biological Sciences. She held a post-doctoral position at the Department of Brain and Cognitive Sciences (MIT, Us), where she worked together with Prof. Ronald McKay and began studying the differentiation of neural stem cells in the striatum, a brain region which is involved in the pathophysiology of a number of neurodegenerative diseases. For a short time, she worked together with Prof. Anders Bjorklund at the University of Lund, where she learned experimental intracerebral stem cells transplant techniques. Back in Italy, she continued studying brain stem cells and focused on Huntington disease. She is the director of the Laboratory of Biology of Stem Cells and Pharmacology of Neurodegenerative Diseases within the Department of Biosciences (www.cattaneolab.it). She is co-founder and director of UniStem, stem cells research centre at the University of Milan (www.unistem.it). For over twenty years, the Laborary has studied Huntington disease with the aim of contributing to achieve a full understanding of its pathogenic mechanisms and to develop pharmacological, genic and cellular strategies that can interfere with the disease. The Laboratory’s staff consists of 20 people, including two regular staff members, five post-docs, two PhD candidates, six junior researchers and three final-year university students. The Laboratory is managed by a laboratory assistant and two project managers. Over the years, the Laboratory’s work has been financed by the Huntington’s Disease Society of America, the Hereditary Disease Foundation (US), the CHDI Foundation (US), the European Union (through its projects EuroStemCell, ESTOOLS, NeuroNE, STEM-HD, Stemstroke, Neuromics, Neurostemcell), the Italian Ministry of University and Research, Fondazione Cariplo (Italy), Telethon (Italy). E. Cattaneo coordinated the European project Neurostemcell (2008-2013). She is currently coordinating a new European consortium (Neurostemcellrepair, 2013-2017) and an Italian network for the study of stem cells in Huntington’s disease, financed by the Italian Ministry of University and Research (2013-2016). E. Cattaneo held over 350 speeches in congresses or meetings in several universities and research institutes. She tutored 85 people, including PhD candidates and final-year university students working on experimental dissertation papers. She is also an active organiser of divulgation and training events targeted at both the scientific community and the general audience. Appointed Senator for Life (on August 30, 2013) by the President of the Italian Republic, Giorgio Napolitano, for “outstanding merits in the scientific field that have honoured the Country”.