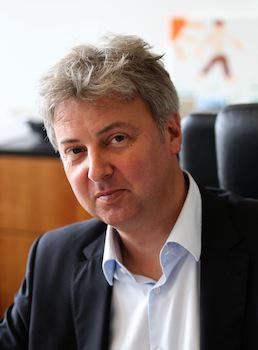 Oliver Brüstle (born 1962) is Professor of Reconstructive Neurobiology at the University of Bonn. He is also Co-Founder and Scientific Director of LIFE & BRAIN GmbH, a biomedical enterprise serving as translational hub of the University of Bonn Medical Center. Trained as an M.D., Oliver Brüstle conducted research and clinical work in neuropathology and neurosurgery at the universities of Zurich and Erlangen, respectively. In 1993 he joined the laboratory of Ron McKay at the National Institutes of Neurological Disorders and Stroke in Bethesda, MD, USA to study neural stem cells. Upon his return to Germany in 1997, he started is own lab and, in 2002, became director of the newly founded Institute of Reconstructive Neurobiology. His field of interest is stem cell research with a particular focus stem cell-based disease modeling and nervous system repair.
In 2013, Brüstle was elected founding president of the German Stem Cell Network. He also serves as Chair of the Managing Board of the Stem Cell Network North Rhine Westphalia.
Having been the first researcher working on human embryonic stem cells in Germany, Oliver Brüstle was instrumental in shaping the public debate around this sensitive topic and became a fierce political advocate of stem cell research.