For whom and what is science 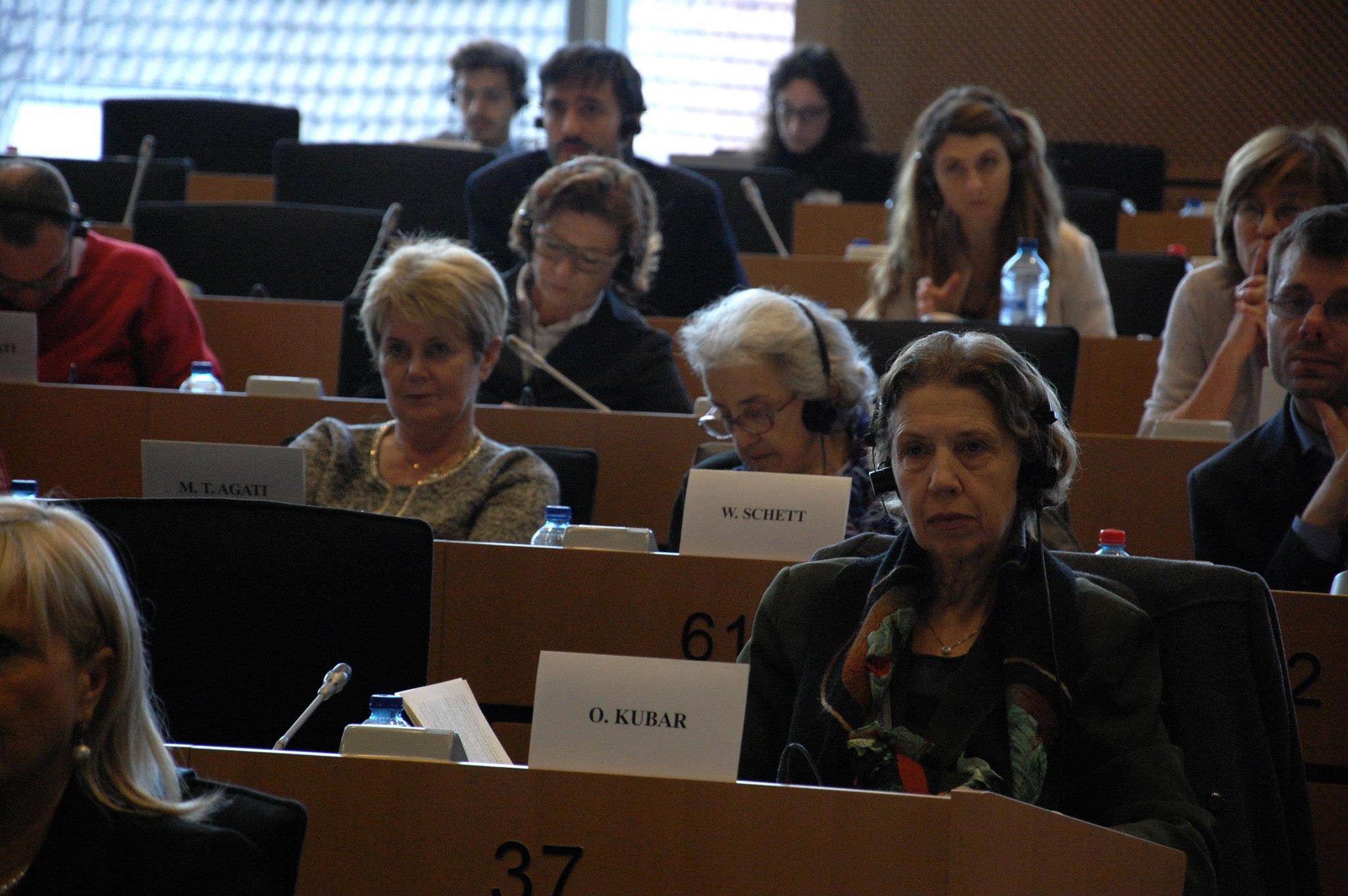 I have been trying to follow almost all the speeches that have been given so far. As a politician, and not a scientist, I would like to offer you this paradox, which has been brought up regularly today, even in the quotation by Lippmann: on one hand, we have a daily, continuous relationship with science, in almost every aspect of our domestic or professional life.
Someone earlier, Boggio or Ballabeni, quoted Corbellini saying: science is the salt of democracy, science enables man to be autonomous, to be a thinking creature, to be in control of his actions. These are by no means light statements! The core of the issue should almost be reversed: we do not have to guarantee the freedom of science, rather it is science that allows freedom. Without freedom there is no science, but without science, we have no freedom. Perhaps the issue should be addressed from this perspective. On the other hand, I believe that our citizens – including our political and social European laboratory, which should be an intellectually advanced society, with a high cultural level – have a very poor relationship with science on a conscious level.

This paradox can be taken even further. There are a number of issues: climate change, the deterioration of the quality of life in large metropolitan areas, food security, and the spread of diseases that the public and the media often blame on the scientific community. If these things happen, it is because of technological progress. In actual fact, science can provide solutions to each of these problems. All this reveals a sort of detachment. I am trying to be deliberately provocative by interrupting your scientific reports. There is a definite detachment between the world of politics and the scientific community.

Once again, I thank Oreste Rossi for having followed us so closely. Generally speaking, this Parliament hosts all kinds of events and constantly focuses on all kinds of social or professional groups in its parliamentary committees, yet the scientific community is arguably the least represented. I am, therefore, very glad to have co-organised this preparatory event with Marco, precisely because, for once, it lets these rooms soak up a bit of scientific inspiration. As I said, this does not happen very often because not many politicians have a scientific background. Everything that is related to scientific research must be treated beyond the surface level: it needs further analysis, special attention. Moreover, politics tend to deal with what comes from society, or rather with what voters – or the machine of electoral consensus – demand. Science-related problems, all in all, do not come first on the market of political issues. Furthermore, there is a clear detachment between media and science. Despite the primary importance of all these issues, they are addressed by the mass media in our daily lives, at best, in specialised scientific programmes or in the scientific inserts of newspapers: the few people who are interested do keep hold of them, but other people put them aside and do not even read them, as if in a sort of zoo.

Perhaps professional communication has not yet developed a dissemination technique that – beyond the sometimes even esoteric, fantastic, extraordinary and curious aspects revealed by new discoveries – is able to convey the structural importance of science as a key element of democracy, freedom and scientific research. This detachment is likely to be the cause of other disconnects between citizens and science.

If indexes like the ones that we saw earlier were to be developed, not on freedom but on the primary importance of freedom of scientific research within our society, many citizens would be likely to rank the above data lower than many others. In everyday life, scientists are seen almost as independent individuals, who follow their own reasoning. At times, it almost seems that people say “it’s science” in the same impersonal way as when they say “it’s raining”, as if it were something extraneous, something that does not really belong to our cultural environment or the world we live in.

We have thanked many people. Now it is time for me to thank Marco Cappato, Filomena Gallo and the Luca Coscioni Association. I think that no other association meets such a desperate need for our society, gathering together politicians, citizens and the scientific community (who have a self-referential inclination to clam up within the academic world) in an attempt to change this data, which I believe is cultural data with which we have to come to terms. These are topics that, in my opinion, may be of interest for the conference that will be held in Rome, and they will certainly be discussed here in the few occasions where scientific aspects are addressed with a systematic approach.

We heard it from Commissioner Borg, we heard it from Director General Coggi: science is not just science; in almost all European Union policies, science is consumer protection, science is environment, science is public health. The list goes on and on. I deal with international trade, and I can say that aspects related to scientific cooperation, such as transferring scientific knowledge to developing countries as a new form of development cooperation, are definitely not taken into sufficient consideration, despite their great importance. The same applies to our agreements: there are currently eight ongoing free trade agreements between the European Union and countries like Japan, India, Singapore, Canada and South Korea, all of which have a high capacity for scientific research. The various forms of research cooperation must be – and partly they already are, though perhaps not enough – a key player in these negotiations.

Perhaps it would be useful to create a sort of mapping of the integrated policies between science and other sectors, where science is bound to play a role that not everybody is aware of.
Another issue that has already been addressed, but that occasionally resonates here at the European Parliament as well, is the common good of freedom of science. This seemed to be an almost indisputable fact, but has once again come into question, sometimes on ideological grounds, and other times on religious grounds. Once again, my perception is that freedom of scientific research is never questioned at grass-root level, that is to say, by a shared feeling of citizens. There are no citizens, committees of citizens or individuals who write – as they do about many other issues – urging those in charge to “be careful”. It is always other powers, so to speak, other groups of interest, or other hierarchies that intervene. It is a threat that comes from above, not from below.

I invite you to reflect upon the only element where widespread public concern interferes with the freedom of science: the topic of vivisection. Here, there is a real battle against the misuse of vivisection or, of course, against overusing animal testing. This battle can have repercussions on research and, for a large part of the public, it raises sensitive issues.
As far as intellectual property and its protection is concerned, there are fierce debates in various fields: consumer protection and respective legal issues, the internal market and international trade. Here, essentially two stances may be distinguished: the first favours the intellectual protection of ‘high research’ (which is my political stance, perhaps due to my ideological beliefs) with potential corporatist and protectionist effects on trade and the potential abuse of a semi-dominant position. The second supports lighter intellectual protection that makes it possible to somehow trace the creation and invention process, but that also supports the circulation and, as much as possible, the spread of this research to other sectors, other areas or other locations.
The last topic is funding. I think that the institutions need guidance from the scientific community. Private funding has its pros and cons, as does public funding.

Lastly, the challenges: it is definitely true that private funding – and sometimes even public funding – is held hostage by their commercial impact: the need to have a return in terms of commercial profit within a few years. This is something that can seriously hamper basic research, directing it only towards those branches that ensure a short-term economic return. Even in the long confrontation between the Parliament and the Council on the adoption of the budget, the issue of research funding has played an important role, with differing standpoints. For the European Parliament, ambitiously funding the framework research programme was crucial for the future identity and sustainability of the European Union. The Council had perhaps a more short-time vision. Life is not easy! There are always issues to talk over.

I remember the words of Pico della Mirandola, a Florentine humanist of the 15th century who I hope you are all familiar with. For me, his beautiful work Oratio de hominis dignitate (Oration on the Dignity of Man), summarises the essence of this challenge. In this dialogue, God speaks to Adam and says: “We have given you no visage proper to yourself, nor endowment properly your own, in order that whatever place, whatever form, whatever gifts you may select” – here Pico della Mirandola creates a precise sequence – “these same you may choose, conquer and possess”, symbolising the sustainability of conquest. “The nature of all other creatures is defined within laws which We have laid down; you, by contrast, may trace for yourself the lineaments of your own nature. We have made you a creature neither of heaven nor of earth, neither mortal nor immortal, in order that you may, as the free and proud shaper of your own being, fashion yourself in the form you may prefer. It will be in your power to descend to the lower, brutish forms of life; you will be able, through your own decision, to rise again to the superior orders whose life is divine”. This is the humanistic spirit of the Early Renaissance that an intellectual like Pico della Mirandola expressed in the 15th century. Still, I think that in the end, we are still grappling with this tension. In politics and in the field of research, everything is possible, but at the same time, it is also possible to give up, and this largely depends on us.