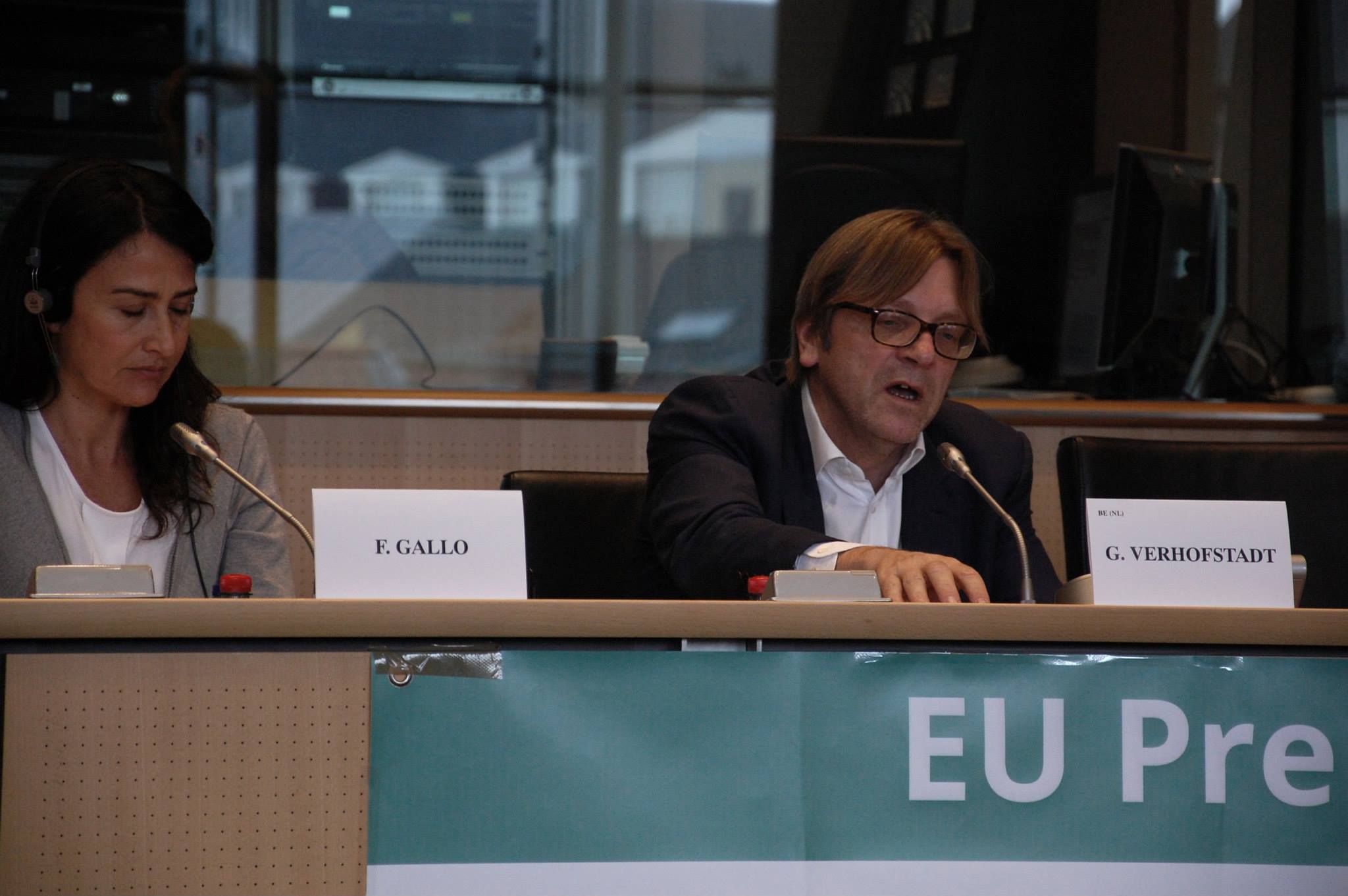 Moi je vais faire plutôt une introduction et non une intervention. First of all I am very honoured to be invited here today. Although I must admit that the topic is not exactly my cup of tea. To be completely honest, as a student I was not very often with my nose in the books. I was more with my nose in politics. Political debates and political conferences? Yes. But academic debates and academic conferences, not so much. So I am not a big loss to science. That is for sure.

You gathered here today in order to discuss the freedom of science. An important issue, because I might not know a lot about science but what I do know – as a politician – is that you cannot compartmentalize freedom. You cannot put in separate boxes. The different forms of freedom are intensely linked with one another. It is impossible to say: “Let us give people the freedom of organization, or the freedom of education and religion, but not the freedom of expression or the freedom to start up a small business”. That would not work in today’s world. Ultimately it would lead to frictions and frustrations in your society.

We all know that some countries, or better, some regimes think it is possible to separate economic and political freedom. To have free markets, but no free politics. I strongly believe they will ultimately fail.

There is a very good book that has been published about that, about this notion of freedom. I think this book is going to be of some importance in the next decades. It is called Why nations fail and is written by Acemoglu and Robinson. It was published more or less one year ago. It is important for politicians because the baseline of the book says: “It is not about economics, stupid. It is about politics”. It explains why sound political institutions are a key condition for wealth and success. In that book, Acemoglu and Robinson indicate that a system in which you separate economic and political freedom is, in the long run, not sustainable. You see appearing the first cracks in the Chinese system for example, where the rising middle class rightly demands its political rights. They want their voices to be heard when it comes to critical decisions in their lives. The ones on food safety, on education, on social minimum standards and on rules for starting their own businesses. Because nowadays it is feasible for a foreigner to start up a business in China, but for a Chinese citizen this is much less an option. The political control is enormous. That is logical of course because a closed political system wants their citizens to be docile employees and not empowered entrepreneurs.

In the Russia, you see the evolution the other way around. In 1991, with the fall of the Soviet Union, it started with political and economic liberalization. Now, twenty years later, Putin is cracking down on political freedom. The consequence is that foreign and domestic investments are falling back. There is also a desperate lack of innovation and creativity. The Russian economy only grows because it is rich in natural resources: oil and gas. Once they have been depleted, the Russian economy will be in big trouble.

We know that governments in such a situation – where there are few healthy forms of freedom – try to push in an artificial way for innovation. A good example in this respect is the 2009 start-up of the Russian Silicon Valley near Moscow. Since then, different types of clusters have been created: around energy, space, biomedical sciences and so on. A lot of Memories of Understanding have been signed, but no shocking innovations have come out so far. Because this whole initiative is very sterile, it is organized “top down”. And as a liberal, I do not believe in “top down”. I believe in “bottom up”. The original Silicon Valley, the one in the United States, was not started with government funding or by signing big treaties. It started with a group of passionate people wanting to create something. That is what I call real economic freedom, real freedom of science and innovation. The kind of freedom you need to build a creative economy. The kind that is embedded in political freedom.

So I see freedom of science as an important corner stone of freedom in general. It is a form of freedom that is more important than ever. I give you just one figure to illustrate this. A figure that shows that more and more people are involved in sciences. In the 1950s, when modern academic research took shape, there were only a few hundred thousand scientists world wide. Today they are with 6 to 7 million people active. Even taking into account the rise in world population, this is a sixfold increase.

Science shapes who we are and where we stand today. We had the first industrial revolution in the 19th century and the second one at the beginning of the 20th. Today we are going through yet another phase of the digital revolution. A revolution that drastically changed the way we live our lives.

One of the scientific fields though in which the freedom of science matters most is healthcare. I know you will be discussing this topic extensively today and tomorrow. I want to conclude by saying that in this important domain there is too often a lack of freedom. The restrictions or even complete ban on stem cell research, for example. But also restrictions in reproductive health or with regard to euthanasia. From the young unborn life to the elderly people so to speak. All the while free science in this domain can improve our lives.

Of course, like in any other type of freedom, also here freedom can never be absolute. But allow me to say that it is not therein the current danger lies. The danger lies in the fact that all kinds of prejudices or religious believes intervene with science, in an unacceptable way, because everybody has the right to his or her believes but that does not mean that you also have the right to deny other people the cure that can save their life, or the medicine that makes their life more bearable, more comfortable for that matter.

Also: the more freedom of science you have, the more it takes place under the public eye, in everybody’s sight. Good science flourishes when there is transparency. It is important that we as society can see what is happening in laboratories or university clinics. If you put all kinds of restrictions on science, most of the time you just push it out of the public sight, into a dark spot, far away from public control.

Freedom of sciences is closely linked to moral freedom, another crucial building block of a fair society. Freedom of science ensures the fact that people can take their life in their own hands. As former prime minister of Belgium I have been a strong proponent of both moral and scientific freedom. I am proud that it was under my watch that euthanasia was liberalized and that gay couples gained the right to marry, adopt and seek reproductive solutions when they want children. Because I believe that free science can create lives with less pain, and more joy. So, I would like to finish here by congratulating you all for this wonderful initiative, for organizing this preparatory meeting at the European level of this World Congress. It is the third time you organize this event and I wish you many, many more times.